The leaders of the Pu‘uhonua o Waianae homeless encampment next to the Waianae Small Boat Harbor on Friday received a $150,000 check that represents a major kick-start toward their dream of raising $1.5 million to find a new location that would move them off of oceanfront state land.

An anonymous donor has agreed to match up to $500,000 given to Dynamic Community Solutions, Pu‘uhonua o Waianae’s nonprofit organization. So the $150,000 check presented Friday from the REIT Way Hawaii Community Giving Campaign — along with $6,000 previously donated to alohaliveshere.org — means Pu‘uhonua o Waianae now has $312,000 toward finding a new permanent location and outfitting it with “tiny homes” for each of the current 270 occupants of Pu‘uhonua o Waianae.

Discussions continue to find a new location — to possibly lease or purchase — somewhere mauka of the Waianae Small Boat Harbor.

Borge — who’s known as “Mamas” — stood in front of a display of artist renderings of what the next iteration of Pu‘uhonua o Waianae could look like, which includes communal spaces for cultural practices and the teaching of Hawaiian building methods.

This year represented a change in approach for Pu‘uhonua o Waianae, which was on the verge of getting swept off of 19.5 acres of state land until Gov. David Ige met face to face with Borge at the Nanakuli home of legendary waterman Buffalo Keaulana in March.

Borge dreams of a new site for Pu‘uhonua o Waianae that would include fresh water, proper sanitation, trash service and, perhaps most important, permanent homes for all of the current residents.

The encampment has drawn complaints from boaters next door about trash, water use and vandalized bathrooms. At the same time, the state Department of Land and Natural Resources expressed concern about possible harm to a rare “Waianae lineage” of half-inch-long red shrimp called opae ula that live below the encampment — along with damage to ancient burial sites and pre- and post-contact rock walls.

Borge has said the people of Pu‘uhonua o Waianae have offered to pay for their water use and have asked to be taught how to properly care for the opae ula.

“We’ve come to learn that building relationships with people, the same way that the village has relationships amongst each other, is really the way to go about it,” said James Pakele, who works with Borge but does not live in Pu‘uhonua o Waianae. “We kind of came into this year kind of at odds with the state. And one of the best things we could have did is we somehow turned that around, and we leaving the year kind of working hand in hand with them.”

“We’re not there yet,” Pakele said, “but at some point we’re going to have to talk to the city and work together to get this whole crazy project going forward.”

Marc Alexander, director of the city’s Office of Housing, suggested that a working relationship with the city may be close.

Alexander began his remarks by calling the day “a very happy occasion.”

The holidays, Alexander said, represent “a season in which we look less toward the past and more toward the future.”

In the meantime, state Sen. Maile Shimabukuro (D, Kalaeloa-Waianae-Makaha) pleaded with insurers to work with Borge and Pakele to sell their nonprofit organization general liability insurance, which they need to rent porta-potties and dumpsters to take care of their community’s hygiene and trash needs.

After the check presentation ceremony, Pakele said he has been trying for six months just to get any insurance company to quote him a price for general liability insurance, which he has not yet received.

Both Borge and Pakele said they are willing to pay for insurance and the cost of porta-potties and dumpsters. 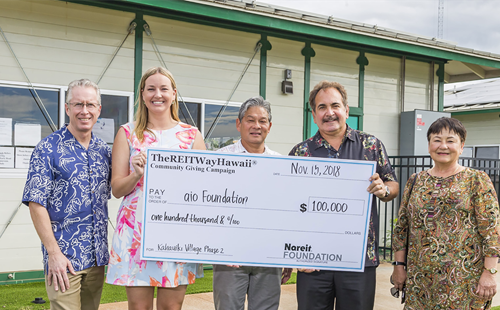 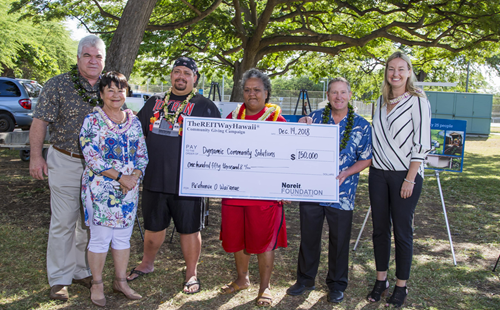